Reaching Cyber Space Superiority is Simplest to Execute by Accelerating the Engagement beyond the Adversary’s Comprehension – and through the Comprehension Barrier to enter the Zero Domain – an uncontested Battle Space.

It is questionable and even unlikely that cyber supremacy could be reached by overwhelming capabilities manifested by stacking more technical capacity and adding attack vectors. The alternative is to use time as the vehicle to supremacy by accelerating the engagements’ velocity beyond the enemy’s ability to target and precisely execute and comprehend the events as they unfold. The space created beyond the adversary’s comprehension is called the Zero Domain. Military strategists traditionally see the battle space as land, sea, air, space, and cyber domains. When fighting a battle beyond the adversary’s comprehension, the conflict occurs in the Zero Domain, not in a traditional warfighting domain. See Kallberg, Jan. “Supremacy by Accelerated Warfare through the Comprehension Barrier and Beyond: Reaching the Zero Domain and Cyberspace Singularity.” Cyber Defense Review vol.3 issue 3 (Fall 2018).

The developing countries weak cyber security measures is an opportunity for offensive cyber operations through proxies without their consent.

The growth of the African Internet and services related to the Internet has been rapid over the last decade. Following this market expansion, a variety of service providers have started to provide access. A fast-growing market put pressure on the providers to deliver services first and only then seek to secure the networks, which is natural in an emerging business landscape. The massive buildup of IT infrastructure with limited security in place in an opportunity for potential adversaries that seek to attack vital interests through proxies to avoid attribution and repercussions. I wrote about the issue in African Security Review. See Kallberg, Jan, and Steven Rowlen. “African nations as proxies in covert cyber operations.” African Security Review 23, no. 3 (2014): 307-311.

The entry of state-actors transform the Internet to a contested space with far more well-financed threats and strategic-systematic approaches. A few nation states have started leveraging the Internet for geopolitical state gains. Using the development of the battle tank as an analogy, the authors explore the Internet’s militarization. The technology used is old, but the ideas are revolutionary.

Militarizing the Internet didn’t require new technology or networking capabilities; rather, it required rethinking how the Internet application layer could be used for political or military gains. A state actor seeking an advantage over another state might attack the core industrial backbone of a targeted country in the hopes of creating havoc in the transportation and communication infrastructure. For the traditional threat, cybercriminals, this would be a pointless operation, which is why we now must quickly change how we view, design, create and maintain information security and protect our assets connected to cyberspace. A militarized Internet and the potential for intelligence and economic espionage, which could destabilize adversarial states, radically change the fundamentals for cyberspace security. State actors could exploit weaknesses in national infrastructures and information systems as well as exploit the public’s heavy reliance on the Internet. See Kallberg, Jan, and Bhavani Thuraisingham. “State Actors’ Offensive Cyberoperations: The Disruptive Power of Systematic Cyberattacks.” IT Professional 15, no. 3 (2013): 32-35.

The effectiveness of strategic cyber campaigns are dependent on the institutional stability of the targeted society.

I started to think along these lines in 2010 and by 2012 I wrote a white paper for AFOSR that was invited to a full proposal. Not every nation is alike. The institutional stability determines when a strategic cyber campaign will have a direct impact on regime stability – and be strategically successful. It can be flipped – e contrario – if the strategic campaign does not challenge the stability it will not have a decisive impact. In 2012 I started writing on my Strategic Cyberwar Theory (SCWT), which culminated in the publishing of “Strategic Cyberwar Theory – A Foundation for Designing Decisive Strategic Cyber Operations” in The Cyber Defense Review Vol. 1, No. 1 (SPRING 2016), pp. 113-128 (16 pages) (download). This also means that in a regional cyber conflict, the societal stability gives one party an advantage over the other. Published as Kallberg, Jan. “Assessing India’s Cyber Resilience: Institutional Stability Matters.” Strategic Analysis 40, no. 1 (2016): 1-5.

Security certifications of hardware will fail if there is no mutual trust between the parties and a control over the production to ensure compliance.

The Common Criteria for Information Technology Security Evaluation aims to become a global standard for IT security certification. However, it faces challenges owing to its rigid framework, rapid technology changes, and the increased militarization of cyberspace. see Kallberg, Jan. “The common criteria meets realpolitik: Trust, alliances, and potential betrayal.” IEEE Security & Privacy 10, no. 4 (2012): 50-53.

For an adversary that seeks to avoid a direct confrontation the covert way to destroy satellites and spaceborne assets is to cyber attack and move space junk, that responds to radio signals and have residual fuel, into orbits that will collide with targeted assets. When collission occur the space terrain will be polluted by debris and an area denial emerges. 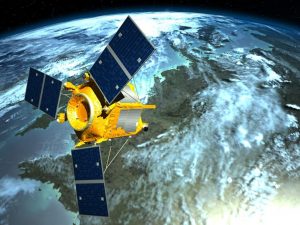 Cyber attacks in outer space is a topic that has surfaced and gained traction lately (2017-2018). As an indication, satellites travel at approximate 18 000 miles an hour so the impact of a collision is massive and a targeted asset is vaporized, creating a cloud of hyper-velocity fragments. My initial ideas and the first concept were published in “Designer Satellite Collisions from Covert Cyber War” in Strategic Studies Quarterly, Vol. 6, No. 1 (SPRING 2012), pp. 124-136 (13 pages) (download).